Reprinted from the 1927 Royal Purple yearbook 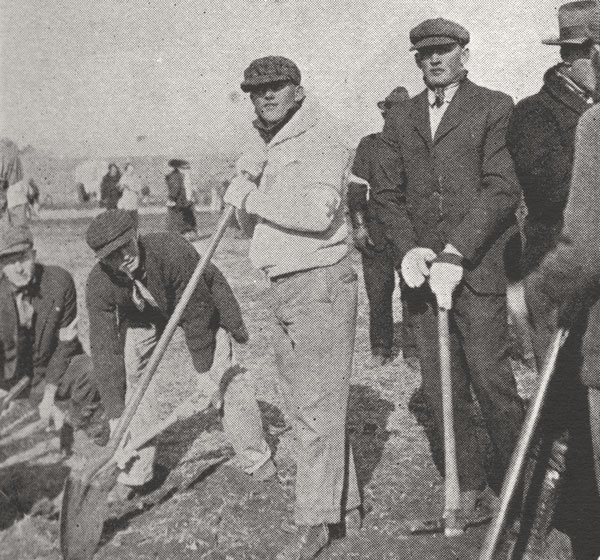 Whether a spade was a spade or a spade was a shovel made little difference; when it had a Kansas State Agricultural College student, faculty member or a royal Aggie booster attached to the handle, it accomplished the purpose. The need for a new athletic field was generally felt and as a result Dec. 7 was set aside for its creation. The classes were suspended, and every man was summoned, and woe be unto him who heeded not to the call of the spade.

At 8 o’clock on the morning appointed, an industrial army of 1,200 students, faculty members and townspeople, uniformed in old clothes and armed with picks and shovels, stood ready for the signal to dig. Up in the domestic science building another, this one of women students and faculty members, responded to the command of the housewife’s duties. As the morning advanced, re-enforcements arrived to swell the ranks of each. Picks, shovels, spades, 20 teams, four tractors, and an army of Aggie men, the combination of which worked wonders. Before noon the old field had been drained, and beyond it to the north, the construction of a new one was well underway. Before noon also the workers could not resist taking hungry glances toward the wagons, which plied back and forth between the laboring mob and the domestic science building.

Under the management of the commissary department of the cadet corps, long tables were arranged on the center of the field. When the 12 o’clock whistle blew, tools were dropped and the workmen formed in lines and filed past the tables. Here each received his ration of buns, weenies, pickles, pie, doughnuts and hot coffee, doled out by the girls and the faculty women. 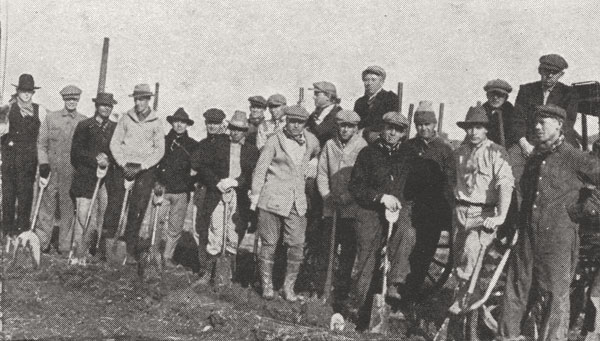 It was indeed a gala day. The entire college was assembled: women, men, students and faculty; the band played; Kodaks clicked; movie cameras were cranked; tractors, large and small, rolled the dirt; and everyone from President Henry J. Waters, and the deans, down to the greenest freshmen, radiated enthusiasm throughout the day.

At 1:30 the attack on the field was renewed. Evening found the old gridiron tiled and turtle backed, and a new practice field well underway to completion. In a word, it found a new athletic field. It also found 2,500 tired people, some rubbing sore muscles and some whose sleep was filled with visions of hot coffee and doughnuts, but all conscious of a worthy work accomplished, and a new link forged into the chain of college unity.