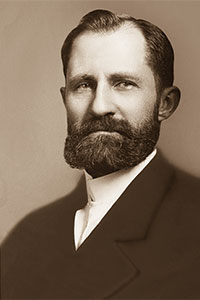 A graduate of Harvard University and chair of political economy at KSAC, Thomas Will was elected president in 1897.

The most important accomplishment of his brief tenure was the establishment of four distinct curricula, designated as agricultural, engineering, general and household economics. After serving for only two years, Will departed in the midst of political tensions in the state of Kansas and the Board of Administration.

He later became a pioneer in developing the Everglades, highways and numerous other land projects in Florida.