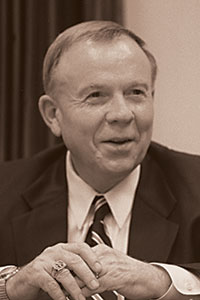 At 23 years, Jon Wefald's presidency was the second-longest in K-State history. He helped boost enrollment past 20,000 students and added 30 buildings to campus — among them Hale Library, the Marianna Kistler Beach Museum of Art and the Leadership Studies Building — to the tune of 4.5 million square feet.

Wefald also takes pride in K-State having three Carnegie National Professors of the Year, and moving K-State to the No. 1 position among public universities for the total number of Rhodes, Marshall, Truman, Goldwater and Udall scholars. Among his favorite Landon Lecturers are former U.S. Presidents Bill Clinton and George W. Bush, former Soviet President Mikhail Gorbachev, Pulitzer Prize-winning journalist and author George Will, and four U.S. secretaries of defense.

“K-State has had some really great presidents,” Wefald said. “You want to leave it in better shape than it was when you started, in all facets. I think we transformed K-State from a rural, agrarian institution into a major university on the national and international landscape.”