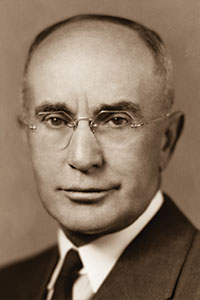 Francis Farrell took office the same year the college’s governing organization became the nine-member Kansas Board of Regents, the entity it is known as today.

Although he worked to add nearly a dozen new four-year curricula, the college shifted its focus from academics to war as thousands of K-Staters were called to duty during World War II.