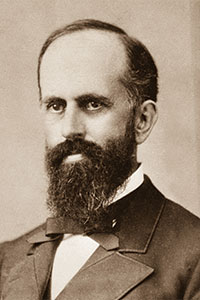 In addition to serving as the college’s third president, George T. Fairchild, a professor of English literature, also filled the chair of logic and political economy.

During his presidency, the agriculture experiment station was established and sports became a more prevalent part of the college culture. Credited with saying, “Our college exists not so much to make men farmers as to make farmers men,” Fairchild appointed the first full-time librarian at KSAC, whose office was in the building that would eventually become known as Fairchild Hall, the present-day home of K-State’s Graduate School.