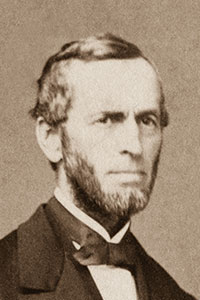 A pioneer Kansas farmer, Methodist pastor and one of the early settlers of Manhattan, Kansas, Joseph Denison was instrumental in building Kansas State Agricultural College’s first faculty and acquiring valuable land that would later become the core of the campus.

Under Denison’s leadership, KSAC opened in 1863 with 52 students — 26 men and 26 women. He left in 1873 to become president of Baker University in Baldwin City, Kansas, and retired in 1879 to return to his work with the Methodist church in the town he helped settle, which includes a street that bears his name — Denison Avenue.