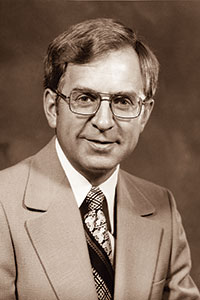 President emeritus Duane Acker recently said, “Though most credit should go to others, there are many accomplishments of which I’m considerably proud that happened during my years in the presidency at Kansas State University.”

During Acker’s tenure, the Chester E. Peters Recreation Complex was dedicated and the university joined the National Merit Scholarship Program.

In his memoir, Two at a Time, Acker wrote, “I think of a university’s leadership as a continuum: successive leaders advancing their university toward its purpose and goals in accord with the circumstances of the time.”